What Robe do you wear?

Wes King sings, “For the robe is of God that will clothe your nakedness.  And the Robe is His grace; it’s all you need, come as you are.”  See video at bottom of post.

Too many times we keep our robes of shame and refuse to give them up for the robes of Grace that God offers us:  We let our past define us.  But Jesus did not come for the righteous, but for those who are sick and broken. (Matt.. 9:12-13 NLT) He came for those of us who are too tired to go on under our own strength.  For those of us who are hurting and wounded.  Jesus came to tell us our past does not define us.

Jesus was brought a woman who was caught in the act of adultery.  His simple answer to her was, “neither do I condemn you.  Go and sin no more.” ( John 8:11 NLT) It didn’t matter what she had done.  The only thing that mattered is how she defined herself from that moment on;  that someone stood against the crowd and said she was worth more than her past mistakes.

It’s not that we don’t try to let go of our past, it is just that like a dry-cleaning ticket we go and pick the shame of our past up again and wear it.  What we need to do is pick up the robe of Grace and of royalty and wear it.  We need to stop letting our past mistakes define us.

When I was letting go of what defined me, it scared me, because without that definition, I didn’t know who I was at all.  And no definition seemed worse that a bad definition.  You have to find a new thing to be defined by.  Let me encourage you to let the following thing define you:  God loves you radically.  That is all you need to know, and all that you need to define you.  He has plans for you, (Jer. 29:11) and it is not too late to accept those plans and jump into the game!

What things are defining you right now.  What do you wish defined you?

For all those who are broken, watch this video by Wes King:

What an awesome privilege!

I recently had the awesome privilege of baptizing one of my oldest daughters.  She had been wanting to be baptized for quite a while and my husband and I kept asking her more in depth questions.  Finally, she chose a date.  A very special date.  The Sunday before Thanksgiving. 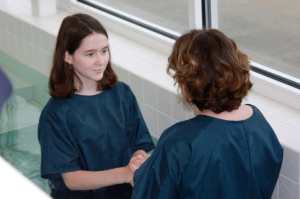 To baptize my daughter is an experience I never thought I would have.  Not only because my daughter could choose from a myriad of family members and mentors, but simply because in my Christian denomination tradition, men typically are the ones who do things in leadership roles such as baptizing.  I go to a church, for which I am very grateful, that they are trying to change and expand the role of women in the church.

So I got to baptize my daughter.  There was so much I wanted her to know.  I had prepared a speech for her, but in the moment, I became very nervous and forgot about half of it.  I think I will write it all down in a letter to her so she can have it as a keepsake.  I want her to know that God has plans for her.  Jeremiah 29:11 states:  “For I know the plans I have for you, declares the Lord, plans for you to prosper and not to harm you, plans to give you a hope and a future.”  I want my daughter to know that by taking Christ on in baptism, it allows her to go perfect and blameless before God, since Jesus made the atonement for our sins.  I want her to know that she does not have to wear the robes of spiritual shame, but can shed the for a robe of righteousness.  I want her to know that she is going to mess up, but that God loves her radically and will pursue her all of her days.

I think I hit most of those points when I baptized her.  I think I just forgot to elaborate on many of them as I had planned to.

Nonetheless, It was a very special day for me not only because I got to baptize my daughter, but because I am wanting to go into women’s speaking ministry.  Although there is much I need to overcome in the way of nervousness, my daughter’s baptism for me, in many ways, was like my initiation into that role from a spiritual perspective.  I hope that continues to be true for me.  For the church family that stayed, I thank you.  For my family that came, bless you.  And for those who were only there is spirit, that was a gift.